I recently decided that it’s time to go trough all of the photos that I have and see if I can organize them by years.

A lot of the photos from 10 years ago, or more – I wasn’t able to retrieve.

With life going by, changing several laptops, relocation and so on – I realized that right now I only have a fraction of the files that I had back then.

Those were my first steps towards photography.

Actually I didn’t even know what a manual mode is, at that stage.

Still after reviewing my images I did noticed that I was already making some deliberate choices when it comes to framing, point of view and composition.

​I saw that I was taking few similar shots from different angles in order to include all the elements I wanted in the frame.

Also on 2010 was one of the first times, that I remember, when I interrupted my daily routine in order to take a photo of a colorful bull statue, which really grabbed my attention, for some reason.

The image quality seems dreadful now but it was ok for it’s time.

My horizon wasn’t straight, I had a lot of exposure errors and other mishaps but I those photos are part of my journey as a photographer and that’s why I feel that they are worth preserving – even if it’s just in a slideshow 🙂 .

There is absolutely no post processing applied on the images – back then I was clueless on post also, so I decided to keep the photos exactly as they were…

Even though I felt a strong temptation to fix some things here and there.. and everywhere 😉

All My Earlier Work Slideshows

Professional Photographer with 7 years of experience. Explored many photography fields but excel in Dance, Portraiture & Macro. 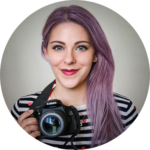