My first Photograph of a Bald Eagle

It was about 9:00 am on a Sunday morning when I first noticed her in the distance.
She was sitting on the tallest tree near the river and she was looking around.
I am not a 100% sure, but I suspect that it is a female Bald eagle because even though she was far away
– at least 40 feet, she looked like the larger one of the two eagles that I saw the day before.

I went inside to grab my camera and of course I had the wrong lens on, so I had to quickly switch to my telephoto lens.
Thankfully the eagle was still there when I came back. 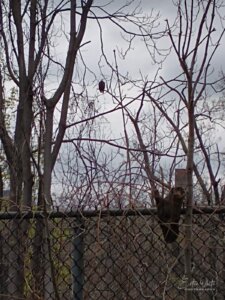 Bald Eagle in the Distance

I wanted to get a clear view but that wasn’t easy. There were two fences ahead of me and so many tree branches. I went as close as I can to the first fence and rested my lens on it. I took several shots and of course I had to use manual focus because the auto-focus couldn’t go beyond the tree branches.

I was getting ready to take another shot, just looking trough the viewfinder and with Canon cameras usually there is a way to magnify the screen view, but for that I needed to pull the camera away and touch the magnifying glass icon on the screen. 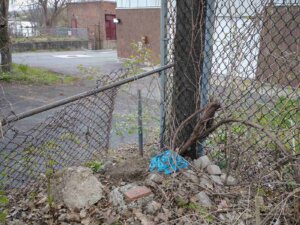 Few days ago I was made aware that there is a whole in the fence and I knew that the hole was big enough for me to squeeze trough. I knew that because I have already gone trough it the day before, when I photographed the two eagles that showed up. 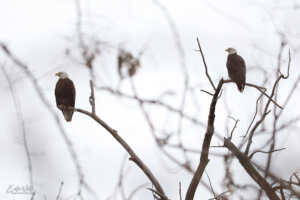 This couple I photographed on April, 17th. It is possible that the eagle on the left was the same one that came back today.

Looking at the the two of them together, I think that the one on the right is the male and the one on the left – the female. But I could be totally wrong.

Yesterday I started editing this shot of the couple, I started working on removing the tree branches but… there were too many and I had lots of other things to do so I left it for another time.

I was over the first fence and I kept on taking photos, they were looking better already.
It really wasn’t easy taking the shots, mostly because I kept loosing the eagle each time I took a breath.

I wanted to get a shot of a Bald eagle for such a long time, long before I got to the States several months ago.
I admire them so much, they are such beautiful birds, so elegant and majestic.

Mature Bald Eagle on a Tree

I was about to try and take a photo using the beast, event though I knew it was going to be quite challenging, especially that early in the morning. I went in and mounted the super telephoto lens, but when I got back – miss lady eagle was gone…