Why Auto-focusing Macro Lenses are Not Good for Macro Photography

When people think of macro photography, they usually think of the expensive auto focusing macro lenses.
There are different versions of them but most share the following things:

I was thinking of making a more detailed video, specifically devoted to auto-focusing macro lenses…
But then again – there is so much hype over them, and they are so overrated,
so I wasn’t sure that I really wanted to add any more to that.

In my previous video about the great mini lens that I stumbled upon half accidentally,
I did mention the auto-focusing macro lenses,
so I took that part of the video and I published it as a much shorter video.

I personally don’t like them. And their price of course has a lot to do with that but –

The main reason auto-focusing macro lenses are not good for
macro photography is that – most of them are simply not powerful enough.
They may be nice as an all in one auto-focusing lens but despite of them
being called ‘macro’, most of what you can produce with them is not macro,
since their maximum magnification ends where true macro begins,
at 1:1 magnification ratio.

After reading my post, couple of beginner photographers found my previous statement quite confusing.
I already know that beginners find this whole topic confusing, so I will try to make it a bit easer to understand.
Let’s go over the confusing part one more time – word by word –

most of what you can produce with them is not macro 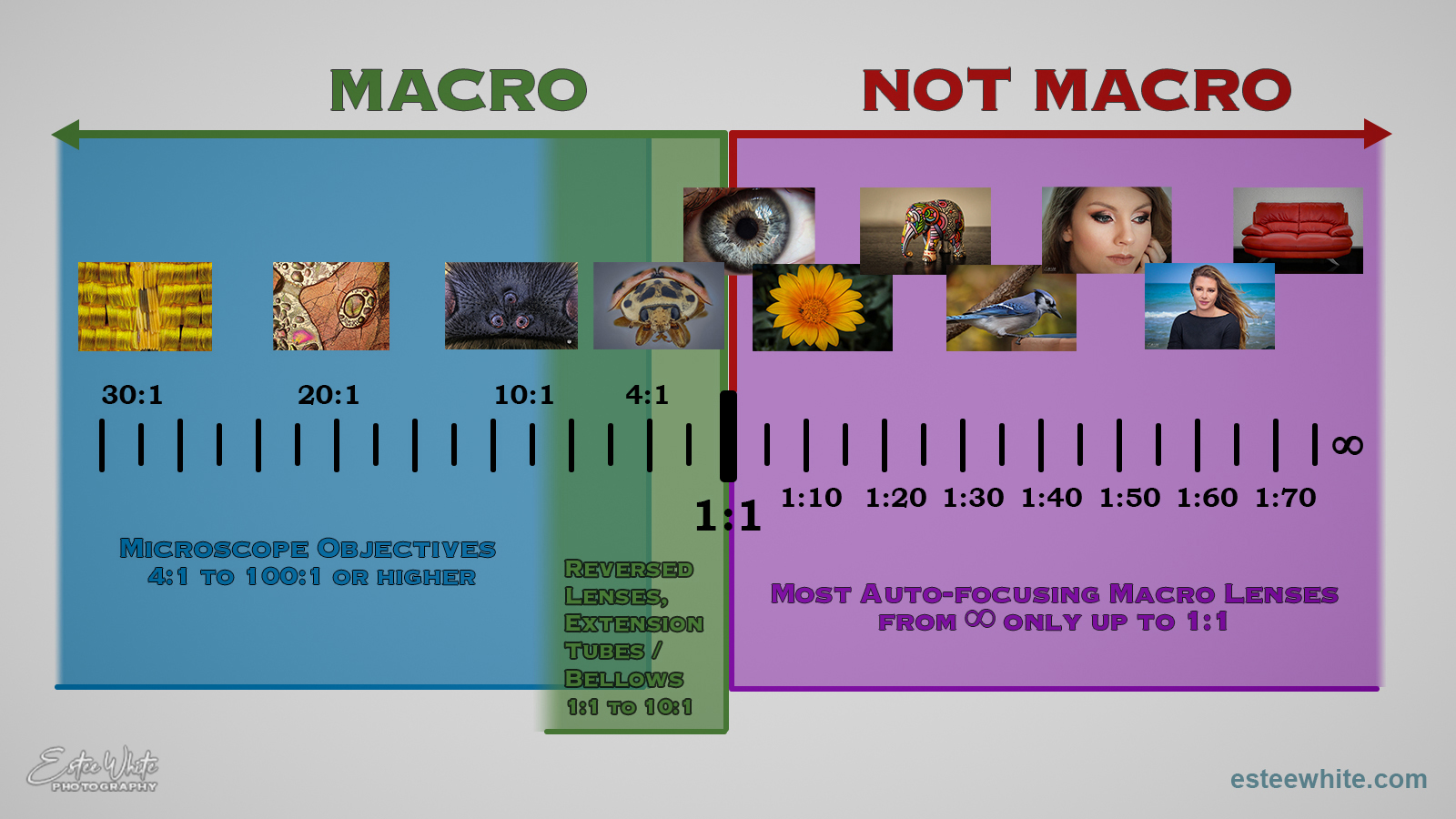 This is an estimate chart that shows you the range of magnification that different setup combination can potentially give you.

In green is the range of magnification that you typically get when using a setup including a Reversed Lens / Extension Tubes / Bellows. Such setups can give you macro magnification from 1:1 up to about 10:1 generally speaking, of course you can stack on more parts and get more magnification but it becomes uncomfortable working this way.

And finally in purple is the range of magnification that you could get when using an auto focusing macro lens.
With them you get focusing from infinity up to 1:1 macro magnification.
You can take photos of tons of things – landscapes, events, product photography, portraits, closeups and yes 1:1 macro.
But do you see how small the macro portion on the chart is, compared to everything else that you can photograph with them? And how they don’t make it to the other side – where macro magnification increases?

This means that –
MOST OF WHAT YOU CAN PRODUCE WITH THEM IS NOT MACRO.
Their capabilities are on the wrong side of the chart, which should be enough to at least
make you wonder if they are the right choice for macro photography.

I probably should have included the chart in the video and explained it there,
but as I said – this wasn’t a stand alone video and I did create the chart after.

Before I conclude this post, I want to mention that there is one good use for the auto-focusing macro lenses
(in macro photography) and that is for doing camera built-in focus bracketing.

I’m not going to include any product links in this post,
because I haven’t found a lens of this type that is worth recommending.

For cheaper and more powerful alternatives to the auto-focusing macro lenses,
have a look at my macro & focus stacking setup videos.

The rest of the photographs are mine and I designed the chart and every single element in it.
Thank you for stopping by 🙂